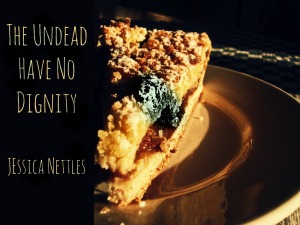 Lily stood at the weathered wooden door, smoothing her black dress, and adjusting her hat and veil. She closed her eyes, took a breath, and knocked. The door opened.

“Ah, Mrs. Smith, come in, please,” said The Coroner. He was wearing an immaculate suit, as was the custom.

She moved slowly. Her arthritis was acting up today. The Coroner took her arm and led her to an office. She sat down in a floral wing chair while he moved behind his shiny black desk.

“Would you care some coffee or tea?” he asked quietly after he was seated.

“Tea? Oh that would be lovely,” she answered.

The Coroner rang a tiny silver bell. A girl in a clean apron and a black dress brought in a tray with a delicate teapot and matching blue cup. She smelled of gardenia and walked with a small shuffle. Mrs. Smith looked at her face. Was she familiar? She might possibly know the girl, but perhaps not.

The lid of the teapot tinkled as The Coroner took the tray from the girl and nodded for her to leave. A soft hiss exited her lips and she stood, hands still extended. The Coroner frowned, and then snapped his fingers right at her nose. The hiss stopped short and the girl turned to leave, but almost ran into the doorframe before exiting.

“Rose is still…in training,” he said, setting the tray on a small table next to Lily’s seat. “Shall I pour?”

“Oh, yes. Please,” Lily replied, charmed that she could hear music in the background.

He poured the tea. First her cup. Then his. Once he sat the teapot on the desk, he sat down, folding his hands in front of him and ignoring the tea altogether.

“Mr. Smith…he’s passed,” she said as she dabbed her eyes with a lace handkerchief she pulled from her purse.

Lily looked at him for a moment.

The Coroner frowned. “We can’t take him if—“

She hung her head and said in a whisper, “if he hasn’t gone off…I know.”

“Mrs. Smith, you do you understand how our system works?”

She nodded, and said, “I just thought—this one time…”

He moved from behind the large, shiny desk and pulled a chair up next to her. Then he took her hand in his.

“We can’t make exceptions. There are considerations…for The Community,” he said.

She turned away from him and pulled her hand from his chilly grasp.

The Coroner did not respond.

She wept into her handkerchief as her tea cooled.

“I just want him to have some dignity,” she whispered.

“And he will be treated with the utmost in dignity. He’ll be of service. Wouldn’t that be what…”

“But he can’t be of service until he’s gone off, so you need to go home and relax,” said The Coroner. He glanced at the tablet on his desk. “I can see that Edwin is locked down. Very good work, Mrs. Smith. Now, you must go home. You wouldn’t want to miss the grand event.”

Lily looked at him, and frowned. Then asked, “Edwin will be better?”

Lily almost said thank you, but that did not seem appropriate, and so she exited silently.

She arrived to a quiet house. Thankfully she’d had time to scrub the kitchen and bathroom with Pine Sol before she visited The Coroner. As she entered through the back patio, she touched a page posted at the kitchen door and thanked the Great Whosit (her name for God) that she’d done her best to follow the law posted there concerning the dead and gone off. She also gave thanks that Edwin had not tried to take a hunk out of her arm as she ritually bathed his body before she put him in Lock-Down.

She hated doing it. She wanted to remember all of Edwin’s kindness, but instead she would forever remember how cold his hands were as she pulled his body past the heavy steel door.

In earlier times, families would bring food, tell stories, and celebrate the loved one. Now, that wasn’t exactly practical. Death was no longer a sentimental moment. In spite of the struggle to maintain lifestyle, there were those who went off. The Council put up the fence and that helped people stay calm.

She poured a glass of tea, and then sat on the porch. In the gloaming, she saw a figure walking toward the house. It was Mary.

“I brought y’all a pie,” she called to Lily.

Mary paused halfway up the walk. “Oh my Lord, Lily! Did he cross over?”

Mary stood momentarily, pie in hand. She set the pie down on the porch rail, and then sat next to Lily on the swing. There was nothing to be said, and so they sat side by side for a long time. A white truck marked with a large blue C rolled by. The back of the truck was filled with hoes and baskets of ripe tomatoes. Fred Whitmore, one of the Community farmers, waved from the driver’s seat. There was groaning coming from the trailer it pulled behind it. Both women waved at Fred, as was expected.

“I want to believe that,” Lily said, trying not to cry.

Lily patted Mary’s hand, “You mean turning him out.”
“They could have just shot him,” said Mary.

“Yes. They could have done just that,” said Lily.

When The Coroner offered to recycle the gone over instead of shooting them, The Council immediately approved The Law. The Law was interpreted as more dignified. Lily had been part of The Council then.
Now she questioned decision they’d made.

The green light next to the kitchen door began to flash. Lily looked over at Mary.

After just a few minutes, a white panel van bearing the familiar blue C arrived. Two men got out. One had a noose stick, and the other wore a shoulder holster.

“You okay, Mrs. Smith?” asked his partner, who was younger and blond.

She nodded. Mary put her arm around Lily’s shoulders. The men entered the house. Lily could hear one of them unlock the metal door. All Pallbearers had master keys for Lock Downs. She heard loud snarling and she heard someone say, “Woah there!” Then there was a scuffle. Soon the young man led the gone over Edwin out onto the porch. Gone-Over-Edwin turned his head and snarled at Lily, reaching toward her. His face was gray.

Mary snatched her away quickly.

The second man came out of the house, and quickly put a snub-nosed shooter at Edwin’s back. There was a thwip followed by a groan.

“Dammit, Darrell! You weren’t supposed to bring him out here without the hood!” he yelled.

“There is no better place than the farm,” said Phillip.

Edwin had become placid, his snarl replaced with a blank stare that went right through Lily.

Philip looked at Lily, tipped his hat, and stepped off the porch. Young Darrell led the slow-moving Edwin to the van, where he was loaded in the back. Phillip drove the van into the gloaming as Lily stood and watched silently. Mary stood with her.

“Mary, I think I’d like some pie about now,” said Lily.

Jessica Nettles is a native Georgian who grew up in Powder Springs and was raised by blue collar, Southern Baptist parents in a 1960s ranch home. She blames this raising for her continued fascination with all things supernatural and post-apocalyptic.

By day, she teaches English at Chattahoochee Technical College, and by night she writes, reads, plays tabletop and role playing games, and knits. Currently, she resides in Kennesaw, Georgia with her two black cats. Her children are grown and having their own adventures, and she is in the process of starting the next chapter of her life, whatever that may be.

7 thoughts on “The Undead Have No Dignity – Jessica Nettles”