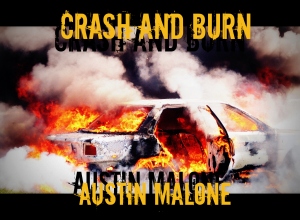 Kristoff awoke in darkness. He was upright, bound tightly across chest and waist, with his head engulfed in some sort of rough fabric. With a violent start, he flailed at his restraints, and the oppressive material fell away from his face. His first gasp of air ended with a retching cough as the overpowering stench of gasoline filled his mouth. His eyes adjusted, and as his vision returned, so did his memory.

He was in the car. Martin had been driving. A quick glance at Martin’s limp form, then down at the man’s blood-streaked pants leg confirmed Kristoff’s earlier suspicion that Martin had been hit. What should’ve been a textbook holdup had gone epically FUBAR and now here he was, up shit creek, with his paddle smashed into twisted scrap against the trunk of a massive tree.

An orange flicker from between the creases of the crumpled hood caught his attention. He jabbed his thumb with enough force to dislocate it against the belt’s release button. It didn’t disengage. Kristoff swore and pressed harder, sublimating the shooting pain in his thumb with thoughts of being roasted alive. It gave way under his renewed assault with a click. The straps slithered away, hissing like snakes as they went, and Kristoff felt suddenly weightless. He bent to scoop up the satchel from the floorboards, and barreled shoulder first through the partially opened passenger door into the night.

He was about fifty yards away when the car went up in flames. Kristoff broke into a trot down the highway. He had to get out of there. If the cops weren’t already on the way from the liquor store fiasco, they’d definitely get called in to investigate a burning car with a charred corpse behind the wheel. He glanced at the marsh to his right. Out of the question. He wouldn’t make two miles over that terrain before the cops and their bloodhounds were on his heels. His only chance was to hitch a ride and get the hell out of there.

Slinging the satchel across his back, he started to jog. He’d gone a little over a mile when he saw the light ahead. A single headlamp crested the invisible horizon, growing brighter as it bore down on Kristoff. A moment later he heard the buzz of its engine. The pitch was too high for a car. For that matter, it didn’t sound like a cop’s bike either. He formed a mental image of a bored hillbilly teenager tearing around on a Kawasaki crotchrocket.

“Let’s go, Bubba-Joe,” he said as he stepped into the motorcycle’s path. “Gimme my ticket to ride.”

It was upon him sooner than he expected. Panicked, he waved his arms and yelled. The driver pulled the bike into a sharp turn, and between one heartbeat and the next, the bike had deftly cut around Kristoff to disappear behind him.

Kristoff ground his teeth and cursed. Unclenching his fists, he willed himself to relax. After a slow count of ten, he was jogging down the breakdown lane again. Within a couple of minutes, he heard the drone of the motorcycle behind him, returning. He stopped and turned to face the biker.

The motorcycle pulled up alongside him, and Kristoff noted with surprise that the driver was female. Clad in black leather that hugged her curves with an intimacy he envied, she peered at him with wide eyes through the sable curtain of her hair.

“Is that your car back there?” she asked.

He nodded. “Yup. Don’t suppose you’d mind giving me a lift to the next town over, huh?”

She shook her head. “The next town over is eighty miles away,” she said. “You’d be better off going back the way you came.”

“Can’t do that,” he said. “I just got back from overseas. Got an uncle offering me a job and a place to stay. I was just passing through that last place. Stopped to get a beer, and some of the locals started giving me a hard time.” He waved a hand at his fatigues.

She arched an eyebrow. “And?”

“And I took them outside and gave ‘em a hard time right back.” He grinned.

“So, you’re thinking they might be holding a grudge, and keeping an eye out for you,” she said.

After a minute’s consideration, she patted the seat behind her. “Come on,” she said. “I can’t take you all the way, but I know a place a few miles down the road where you can rest up for the night. I’m Morgan, by the way.”

“Pleased to meet you,” he said as he took her hand and climbed onto the bike behind her.

“Hang on tight,” she said, and with that, they were off.

With his arms around her midsection and his face buried between her shoulder blades, Kristoff had no way of knowing how far or fast they were traveling. At some point, the exhilaration of the ride gave way to something more primal. He became aware of the soft heat of her body as he pressed against it. The scent of her hair in his face was musky, like incense, and his heartbeat quickened. Slowly, he inched his hands up from her waist, feeling the smooth leather slide under his palms as they caressed her flat stomach, and moved higher still. He was pleasantly surprised when he encountered the soft swell of her breasts unhindered by underwire. His fingers traced circles around her nipples. He could feel them, hard even through the leather.

Morgan downshifted then, and the bike slowed.

She laughed. “Don’t apologize. I’m not kicking you off. We’re almost there.”

He raised his head to look over her shoulder as she piloted the motorcycle off of the highway. He didn’t see a marker for the road, and from what little he could see of the hard-packed dirt trail, calling it a road may have been generous. Before long, their destination came into view. A neon vacancy sign flickered below a larger sign that simply read: “Hotel.” The building itself was a shapeless mass of darkness that lurked behind the sign.

Morgan parked the bike in the hotel’s empty lot, and they dismounted.

“Is this place even open?” Kristoff asked.

Morgan grabbed his hand and hauled him toward the entrance. “Come on, lover,” she said with a laugh. “Let’s get you tucked in for the night.”

Kristoff didn’t get much of a chance to inspect his surroundings as they entered the lobby. Morgan hustled him past the desk where a bored-looking young man glanced up from a ragged novel just long enough to toss a plastic-fobbed key onto the countertop. She scooped it up as they passed, and led Kristoff down a dimly-lit hallway. Morgan paused at the door to unlock it before sweeping it open with a flourish.

Kristoff entered the room and barked a laugh. The chamber was dominated by a sagging heart-shaped bed the color of dried blood. His eyes tracked upward and saw a soot-stained mirror on the ceiling above. Curious.

Morgan eased the door shut and snaked around in front of Kristoff. With a coy glance over her shoulder, she gave his belt a tug, loosening it, before slinking away to perch on the edge of the bed.

“Well, loverboy,” she purred. “Let’s see if we can pick up where we left off. Show me what those busy little hands of yours can do.”

Kristoff crossed the room in two paces, hands outstretched. He stopped just short of touching her, though. Something was wrong. He peered at his hands. They looked different. As he watched, his flesh darkened, and his skin rippled as though his blood was bubbling beneath its surface. With that came an intense itching, followed immediately by a bone-deep ache, as his flesh blistered and began to peel.

“What?” he gasped, and that was all he could manage before searing pain exploded across his entire body. He tried to scream, but was unable to produce more than a quavering whimper. He sank to the floor, curling in on himself as his skin ruptured and sloughed off in tarry chunks.

“There are two things I should have told you, lover,” Morgan’s voice lilted. “First thing: you didn’t escape the fire.”

Kristoff writhed and mewled like an injured animal. There was no escape from the pain, no portion of his body that wasn’t a nexus point for currents of agony. He could hear her laughing at his pain. Worse were the voices of the others, tittering and giggling, muttering and whispering. They crashed against his frayed nerve endings like a jagged wave.

“Tell him,” they cackled. “Make him understand.”

“The second thing, darling,” she said, her voice dropping to a violent hiss. “You didn’t. Escape. The Fire.”

Austin Malone is a writer of short fiction who resides in Texas with his wife, daughter, and an indeterminate number of cats. His work has previously appeared in Bloody Parchment (Vol. 2), A Fancy Dinner Party, and Penny Dreadfuls: Halloween Special. He neither blogs nor tweets, but invites readers to check out his goodreads page to find out more about his work.