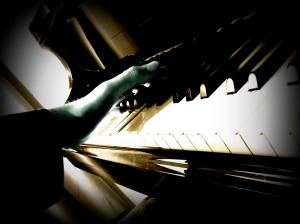 It wasn’t supposed to end this way. All or nothing, not one or the other. It wasn’t fair to know he had to go on without her. His sister came over often, saying it was time to move on, to let go, and she was right, but it didn’t make the decision to leave any easier.

“Play for me?” Ali whispered, “One last time.” She was standing in the doorway to the bedroom of the flat they used to share. She walked towards him and lifted the fallboard, exposing the white and black keys. Without a sound he gently laid his long fingers over the keys. With soft strokes, he began, and a Nocturne of Chopin’s infused into the air from the dusty piano. He closed his eyes as she entered the room and sat next to him on his bench. Having her so close to him still, after all this time, made him nervous, and an E natural replaced the flat it should have been, making him cringe. She just laughed, an obvious forgiveness of his mistake, making the motions to lean her head against his shoulder, and how he wished in that moment he could feel her skin against his.

The accident was his fault. He was paying closer attention to the radio dial than the road. The last thing he remembered was her screams, although he did believe he heard an ambulance driver say it didn’t look good for either of them. That was when he began to pray. He prayed God would allow her to live. Of the two of them, surely her life meant more.

It was noon. Almost time for the two year memorial and the knock on the door meant it was time to go, this time forever – a final goodbye. His playing subsided as they looked into each other’s eyes. “I’m going to miss you,” he whispered.

The door opened, and they both turned to see his sister at the door. “It’s time… are you ready?” she asked, not taking notice of the ghost in the room.

Ethan and Ali looked at each other. “I’m ready.”

Ethan’s sister smiled. It was a comforting, pained smile. “I didn’t know you knew how to play,” she whispered.

2 thoughts on “One Last Time”